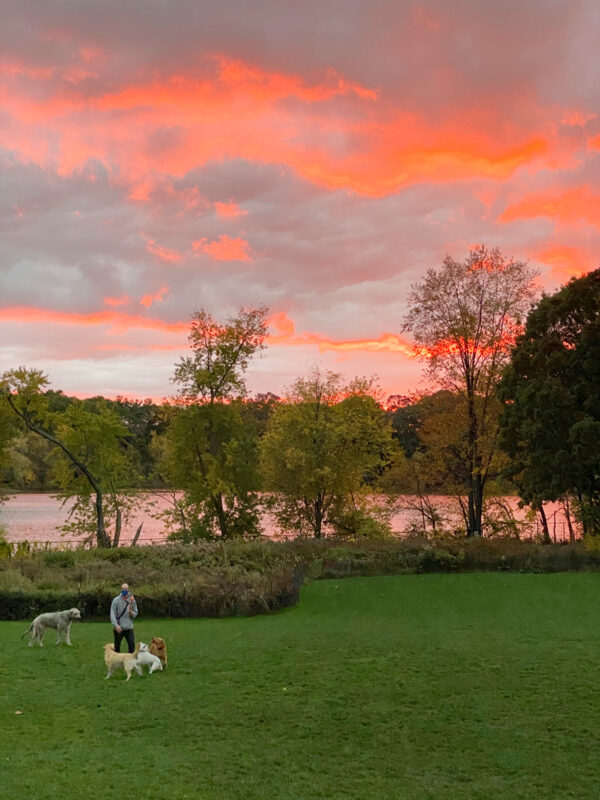 The Fresh Pond Reservation – 162 acres surrounding and protecting the 155-acre Fresh Pond Reservoir – is the largest open space in densely populated Cambridge. Assembled by the city’s water department in the late 1800s, the Reservation’s landscape was shaped by an 1897 Olmsted Brothers plan that featured carriage roads and varied views. Over the years, the department was hard pressed to match maintenance to use, and by the 1950s, the Reservation had fallen into deteriorated condition. In 1962, members of the Plant Club and Garden Club (then separate clubs) joined forces to advocate for the restoration of the Reservation.

The clubs began by focusing on Black’s Nook – the most degraded area of the Reservation. A small pond that was once connected to Fresh Pond, Black’s Nook had – given its accessibility from Concord Avenue – become an unsanctioned dumping site. In 1962, the clubs reached out to city officials with a plan for dredging the pond and then replanting the banks with native trees and shrubs.

In the spring of 1963, the Cambridge DPW kicked off the project, hauling away 93 truckloads of debris (appliances, car parts, tires, bedsprings, and more). A city crew then prepared the surrounding area for planting. The clubs contributed 40 trees (white pines, red maples, and a specimen red oak), siting the trees, supervising planting, and then watering over a hot summer. Plantings in the following years included nut tree and beech groves.

At the same time, the clubs began work at another neglected sector of the Reservation – the grounds around the City Infirmary (now Neville Place). The effort included the creation of a sitting area and entry garden, and plantings of flowering trees, and was supplemented with additional plantings over the next decades.

The success of these projects led the clubs to set up a special account for tax-deductible contributions that would be used for further tree planting at the Reservation or for public planting elsewhere in the city. Another result of the clubs’ collaboration was the merger that created the Cambridge Plant & Garden Club in 1966.

To guide future projects at Fresh Pond, the CP&GC undertook a horticultural review of the Reservation. Published in 1978, the study included detailed recommendations for replanting and upgrading each one of the Reserva­tion’s 14 areas as well as a list of suitable native and naturalized plant material.

The review pointed the way to the club’s next project – at the northeast corner of the Reservation where the views from the pond were dominated by the commercial strip of Concord Avenue between the Fresh Pond and Alewife Brook parkways. As with the Black’s Nook project, the club presented a proposal to the Water Board. The concept behind the proposal: to screen the Reservation from the roadway, as simply and naturally as possible, without destroying the openness of the pond area, and at the same time, to provide safe pedestrian access.

Completed in 1979, the “Sozio Corner” project included the planting of approximately 75 trees and small shrubs similar to those already established on the Reservation. With regrading, installation of a new all-weather pedestrian path, removal of excess blacktop, and reseeding grass, the cost of the work – $10,000 – was divided between the club and a matching Community Development Block Grant.

The “Sozio Corner” work was followed in 1980 by a project between the area now known as Lusitania Meadow and the pond. A new path was established – an element that echoed the original Olmsted plan for the Reservation. The planting of an expanse of red maples and white pines, with other assorted small trees and shrubs, gave this stretch of the pond’s perimeter new visual interest, as well as some protection for runners and walkers from wintery gusts blowing across the water.

At the same time, the club was planning another major project – the restoration of a neglected wetland meadow near the Reservation’s golf course. With its record of accomplishments at Fresh Pond, the club decided to apply for a national grant open to member clubs of The Garden Club of America. In 1980, CP&GC was pleased to receive word that it had won the GCA’s Founders Fund grant. Amounting to $7,500, the funds went toward planting of native trees and shrubs, giving new interest to the area for people as well as birds. Additional club funding allowed more planting in the meadow over the next five years.

Along with planting efforts, club members began to advocate for a landscape master plan for Fresh Pond, a discussion that intensified with the City’s decision to build a new water treatment facility. In 1997, the city manager appointed a master plan advisory committee that included two club members, one of whom served as co-chair. The committee’s report, issued in 2000, called for protection of water quality, preservation of open space, naturalistic plantings, and a strong maintenance program. Club members turned out in force to lobby for the report’s adoption, which the City Council did by a unanimous vote in January 2001. 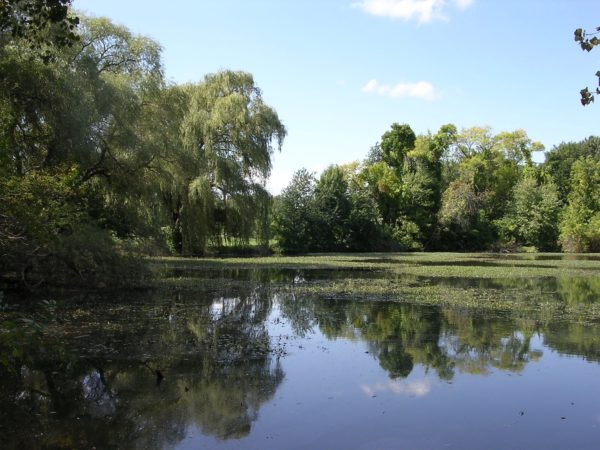 Since the adoption of the master plan, the CP&GC has continued its involvement – advocacy and funding for planting – at the Reservation. In 2002, a club gift of $9,000 allowed completion of a sugar maple allée at Kingsley Park. Then came a return to the site of the club’s first project – Black’s Nook. Forty years on, the meadow had become overgrown with invasive plants, and some trees had died. Again, the club engaged with the Water Department, but this time the planning process was extended over seven years and involved a number of consultants. Advice from club members (and the donation of some club funds) helped shape the design, from placement of the Concord Avenue entrance to details concerning “hopping” stones (a feature of the original 1963 project). In 2012, the club presented the Water Department with a check for $25,000, earmarked for larger caliper trees. Most recently (in 2021), the club planted three white oaks at Kingsley Park in memory of a member of the original Black Nook’s team.

Over the past 60 years, the natural beauty of Fresh Pond Reservation has been immeasurably enhanced – a source of pride for the club. The club continues to advocate for the Reservation as envisioned in the master plan, but since 2001, it has been able to do so through the Reservation’s master plan advisory board. When the board was established, the city manager named two club members, one who served as the first chair. The board currently includes several club members. Concerned about existing trees, the state of the planting around the poet’s monument, the crumbling stone steps between the upper and lower levels of the park, the lack of benches, mismatched or non-working light standards. CP&GC began advocating for this park in 2015, and the City responded quickly by replanting the area around the monument. Concurrently, the club funded the pruning of the park’s crabapples, planted two crabapples and added new lilacs to an existing grouping. Since 2016, the club’s advocacy has produced new benches, new lights, new drought-tolerant perennials around the monument, new trees near Mount Auburn Street and the renovated steps. During the winter of 2020, CP&GC funded additional tree pruning. On May 14, 2009, city officials join with West Cambridge neighbors and CP&GC to dedicate and reopen Craigie Street Park, a triangle pocket of land given in 1971 by a CP&GC member and her brother as a gift to the city of Cambridge. The park was refurbished in 2009 with Community Preservation Act funds and substantial assistance from CP&CC. Currently, the club keeps an eye on the park and funds professional pruning of the park’s yew hedge.

The Cambridge Committee on Public Planting Early work at Fresh Pond Reservation led CP&GC members to think citywide. In the ’70s, two activist members proposed and established the Cambridge Committee on Public Planting to advise and support the city in improving public planting. Serving as the Committee’s first chairs, they advocated for a city arborist and a street-tree planting program. When the city’s first arborist was hired, the club was supportive by funding the DPW’s first water tank, providing contributions for street trees, and supplying hand-held computer (novel then) for a street-tree census. Since the creation of the Committee in 1979, a succession of club members have given their time serving members and as chairs. Today, the Committee has a diverse membership open to all interested Cambridge residents. The expertise of club members is a significant resource as the City maintains existing public plantings and considers new ones. The Cambridge Common is a central part of busy Harvard Square, and its 16 acres are traversed by an estimated 10,000 pedestrians and cyclists daily. This urban green space is a National Historic Landmark where George Washington took command of the Continental Army, and home to the famous “Washington Elm.” During World War I, the Common’s trees were removed to make way for army barracks. The post-war Common was left in shabby condition, and late in the 1920s, the Plant Club began a replanting project that continued for over twenty years. Work began in 1930, with the planting of three elm trees in honor of the Tercentenary of the Commonwealth of Massachusetts. By the end of the project, the club had planted a total of 3,500 border shrubs around the Common.