In 1967, before this historic site was conveyed to the National Park Service, CP&GC embarked on a five-year researched restoration of the garden. After the NPS assumed responsibility of the Longfellow House in 1973, it agreed to allow CP&GC to supervise the care of the garden and grounds. The club was involved in planting and maintenance of the gardens into the late 1980s, and continues to support the garden with funding.

On the east lawn of the Longfellow house is a prominent Linden tree believed to have been planted in the early 1800s. In 2008, CP&GC began a multiyear study of this historic specimen, including efforts to propagate it. Two of the successes allow CP&GC to say that the “Longfellow Linden” lives on at the Cooper-Frost-Austin House (the oldest house on Cambridge) and in Mount Auburn Cemetery, near Longfellow’s grave. Both lindens are exhibiting the same eccentric branching of the original. 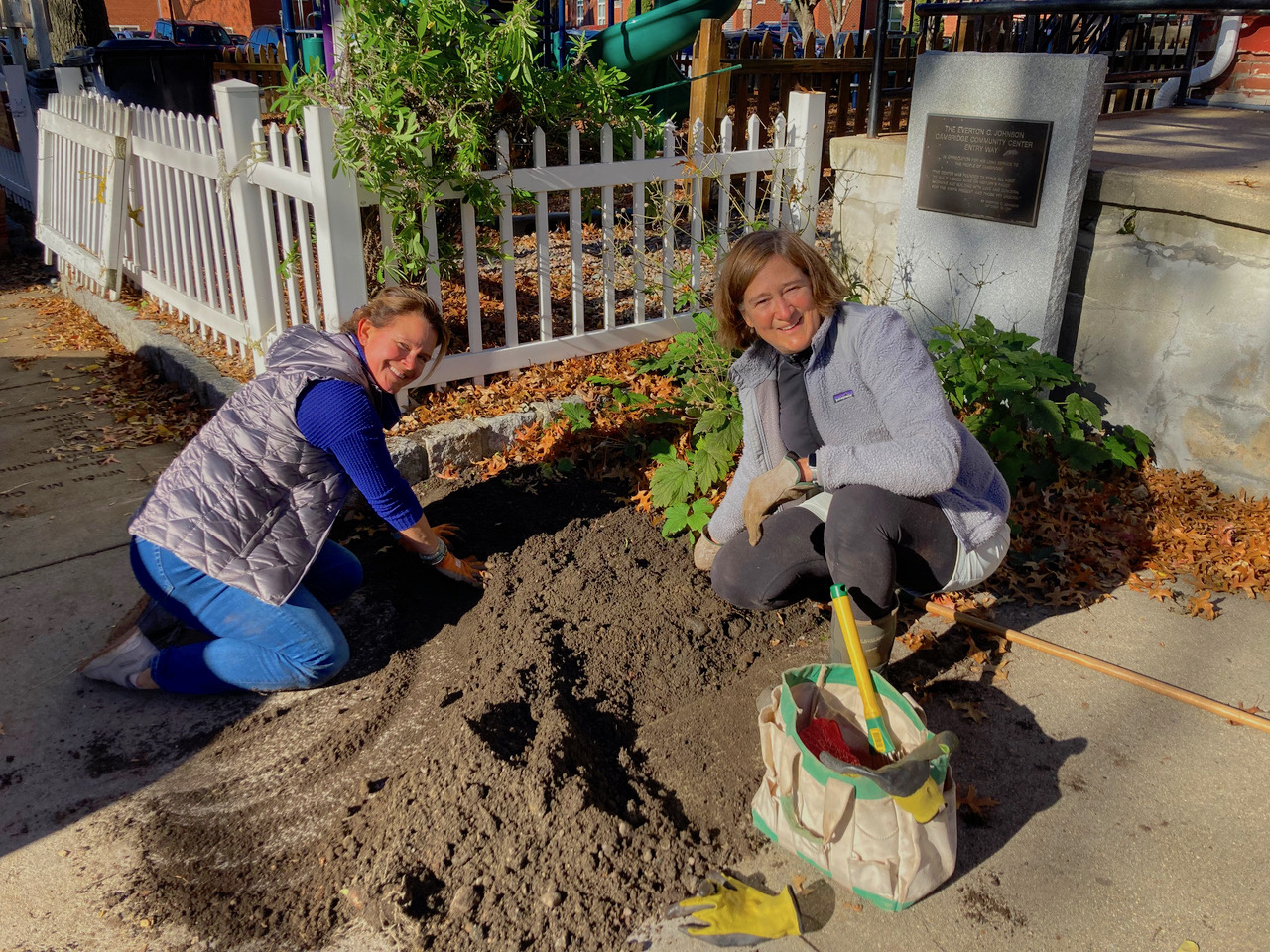 Located off Putnam Avenue, the Cambridge Community Center has been serving children, youth, and families throughout Cambridge for 90 years. CP&GC has been here before—for twenty years starting in 1936, the Community Center was a strong focus for our donations and hands-on gardening.  We have connected again with the current leadership and look forward to working with them on helping to design, plant and maintain their gardens and grounds even as they embark on a capital campaign for restoration of and an addition to their building. In 1993 CP&GC hosted a symposium on critical issues facing the Charles River. The seeds planted then and the abiding commitment CP&GC member Renata von Tscharner lead to the founding of the Charles River Conservancy in 2000. The Conservancy continues to thrive under new director Laura Jasinski, who is focused on the group’s mission of striving “to make the Charles River and its parks a well-maintained network of natural urban places that invite and engage all in their use and stewardship.” CP&GC has collaborated on multiple projects with the Conservancy, most recently working toward reclamation of the river bank at Hell’s Half Acre. Photo by Aaron Bourque, courtesy Charles River Conservancy After the Cambridge Historical Society received the c. 1685 Hooper-Lee-Nichols House as a bequest in the late 1950s, the Society reached out to the Plant Club and the Garden Club for help with the garden. In 1962, the Garden Club began its efforts by designing a landscape plan that was simple and a miniature representation of the estate that once surrounded the house. One of the garden’s most significant features – the yew hedges – go back to the original Garden Club plan.

Over many decades, CP&GC has worked at the site on many elements of the gardens: donating and planting trees, renovating the c. 1916 Colonial Revival fence and front gate, planting thousands of spring bulbs, restoring the garden’s grape trellis, managing lawn care, and completing myriad spring and fall garden clean ups fundinf pruning, and more.

In the years that followed, CP&GC added many new pieces of including a very healthy little-leaf linden, and boxwood. Around 1990, CP&GC enlarged the gardens on the southern façade, improving the appearance of the garden as viewed from the street. Annuals and perennials compatible with the colonial and colonial revival periods of the house were planted with spring blooming bulbs that are replaced annually.

In 2010, two pink-flowering dogwoods (Cornus florida var. rubra) were added to the property’s east side and restoration of the Colonial Revival entrance gate was undertaken. Funds were raised, research compiled and construction drawings executed by club members. Work was completed in 2011, including custom hinges and mounts for the new gate, updated lighting, and brickwork reworked to accommodate the newly restored gate. A revitalized grape trellis is a garden highlight (c. 1916) and was restored with grant funding applied for by members of CP&GC. The grapevines continue to be tended by members with help from other Cambridge residents. Cooper-Frost-Austin House is the oldest house in Cambridge and owned by Historic New England. Beginning in 2015, a group of CP&GC gardeners began hands-on work – weeding, bulb-planting, planting (including a CP&GC propagated Linden), and pruning. CP&GC planted many flats of Historic New England provided vinca, in an effort to stabilize the front bank of the property. CP&GC members continue hands-on work at the site, including installing and planting containers, weeding, watering, and planting additional material and hundreds of Spring bulbs.

On The Rise is a day program in mid-Cambridge that provides safety, community, and advocacy for homeless and formerly homeless women. On The Rise occupies what was once a single-family home on Broadway, and its south-facing garden has been half-designed and half-implemented, while a frequently used portion of it languishes. CP&GC is committed to working with the program leadership to brainstorm improvements for the “second half” of the garden and provide help with ongoing maintenance.