“What’s in a Name? or Is This the First Garden Club?” 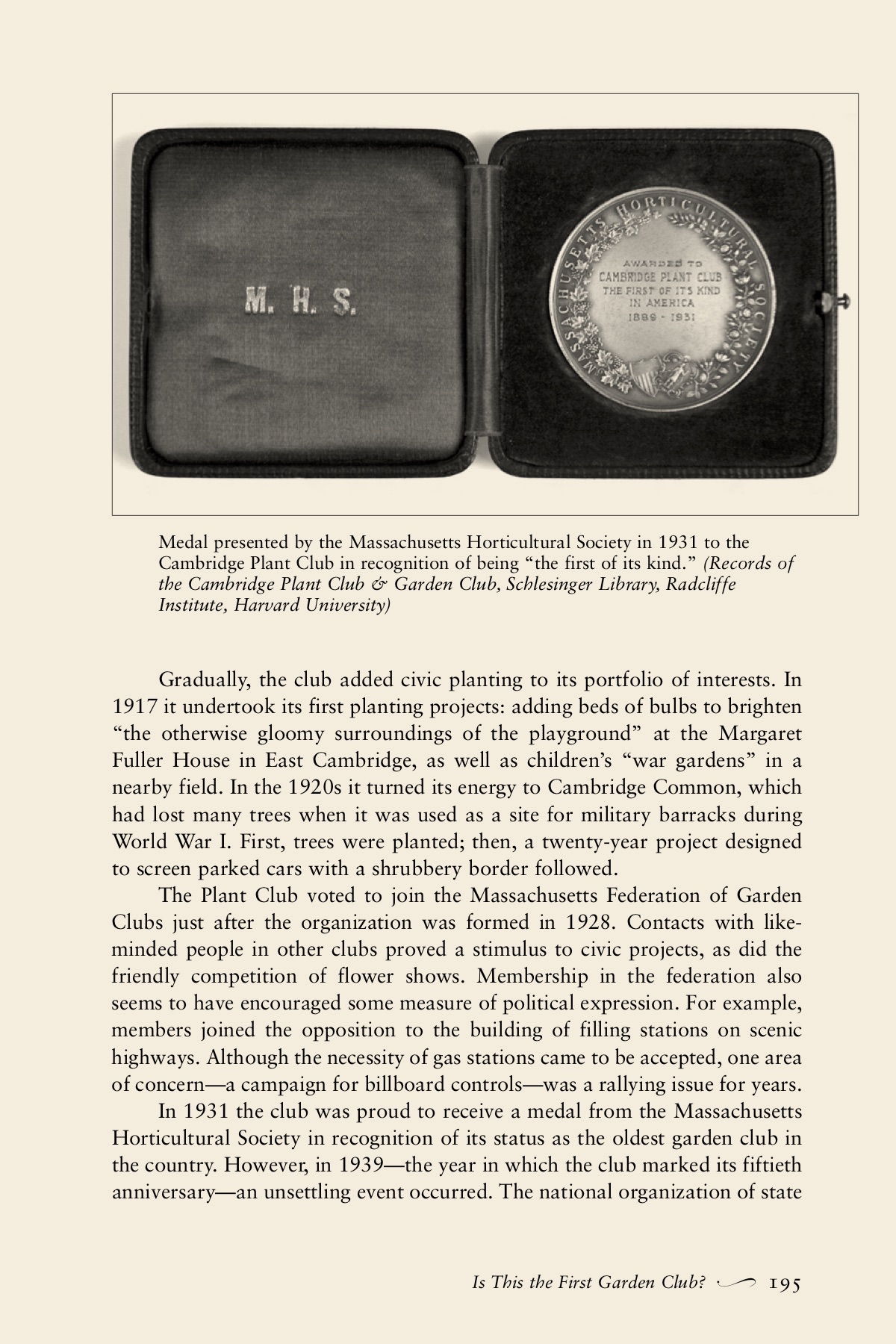 There is often controversy surrounding the honor of being first established – whether in the realm of schools, colleges, hospitals, or special-interest clubs. Garden clubs are no exception. The first women’s garden club was a Cambridge club – the Garden Street Garden Club, founded in 1879. After the Plant Club was founded in 1889, the Garden Street Garden Club gave way to the younger club. The third oldest women’s club was the Ladies’ Garden Club of Athens, Georgia, which held its first meeting in 1892. Around 1930, a controversy arose between the Cantabrigians and the Athenians concerning which of the two clubs was an older and truer garden club.

The dispute is laid out “What’s in a Name?’ or ‘Is This the First Garden Club?’” – written by CP&GC historian Annette LaMond and originally published by the Cambridge Historical Society (now History Cambridge). The paper includes a number of images drawn from the archives of the CP&GC. Read a PDF of the article HERE.

The Roots of CP&GC: The Plant Club A group of Cambridge women with a talent and passion for plants joined together in January 1889 to form a club the became the Floricultural Society, but at its second meeting was renamed the Plant Club. Early conservationists, members supported the fledgling Society for the Protection of Native Plants, later known as the New England Wildflower Society, now named the Native Plant Trust, the first conservation organization for plants in the United States.

These inquisitive women tapped into the rich academic community in which the club was founded and created the template still followed by today’s members: educational presentations by eminent academics, scientists, historians, designers, conservationists and members alike that became the central feature of their meetings. More informal committee meetings enhanced the intellectual pursuits of members—sharing their own horticultural knowledge. Recipes for fertilizers and soil enrichment, pest treatments, garden walks and visits, and propagation best practices were among topics and expertise shared by members. Interest in the Plant Club grew as its civic work expanded, however membership was limited to allow for meetings in members’ homes. A sister club was founded in 1938 — the Cambridge Garden Club. Members of the new club, including several Plant Club women, were soon thrown into their first conservation project – helping in the cleanup and restoration after the Great Hurricane of 1938. The shared interests of both clubs led to many joint meetings, programs and outreach projects. Children’s gardening was a particular focus. A campaign in the late 1950s to save 36 acres of marshland along the Charles River from the four-lane Greenough Boulevard failed, but lessons learned set the stage for future successes.

Early in the 1960s, the two clubs embarked on a large conservation project at Fresh Pond Reservation – the City’s largest open space. In partnership with the City, the clubs reclaimed and replanted Blacks Nook – given its proximity to Concord Avenue –  a site that had come to be used for dumping. The experience galvanized members—as organizers, workers, and fundraisers—and the two clubs joined together create the Cambridge Plant & Garden Club. The newly combined organization applied for membership in The Garden Club of America, becoming a member of that national network in 1968.

Work at Fresh Pond Reservation continued though CP&GC turned its attention to the restoration of other green spaces in the city. CP&GC launched a restoration of the Longfellow House garden and grounds – being the primary gardeners there until the late 1970s. The club also focused its energy on the garden at the Cambridge Historical Society’s Hooper-Lee-Nichols House. A project that had begun as a Garden Club effort in 1961 where substantial commitment continues today. Other planting projects have taken CP&GC to public schools, parks, and other green spaces across the city.

The Plant Club’s founders would perhaps be astounded by the way their club has expanded, but they would have hoped for no less. CP&GC is proud that its archives reside at the Radcliffe Institute’s Schlesinger Library on the History of Women in the United States.

Go to Who is CP&GC:
Our Club Today | Our History | CP&GC Contributions in the Smithsonian Archives of American Gardens